The most popular destination in the Desolation Wilderness, and for good reason. A beautiful overnighter to a spectacular alpine lake flanked by the Crystal Range.

We essentially stayed on the PCT the entire way. Here’s the route we took:

We departed for the El Dorado Ranger Station from San Francisco at 5:00am on Saturday in order to get the last minute first-come, first-served overnight permits. The station opens at 8am, and although we arrived at 7:15am, there were already 4-5 groups ahead of us! In the end, everything worked out. We managed to snatch the last 2 permits for Lake Aloha (Zone 33).

Parking near the trailhead was was a nightmare – everything was full. We ended up parking alongside the road approximately .5 miles away from the actual trailhead.

The trail was easy to find, and there weren’t too many snowbanks left on the trail itself. The ones that were left didn’t require any special equipment to across. Just follow signs for PCT and Lake Aloha. There’s so many people on the trail that you can’t lose your away.

We spent some time looking for a good place to set up camp. We wanted something that was isolated, flat, far enough from water (leave no trace!), and had a good view of the Crystal Range towering over the lake.

I noticed that a lot of people set up camp near the south to south-east shore of the lake. This part is pretty forested, and the views aren’t as good. If you hike 0.5 to 1 mile along the eastern shore you’ll find tons of good spots.

Mosquitos were a lot better than expected! There were definitely swarms with thousands of mosquitos, but most of them didn’t bite. The breeze next to the lake definitely helps. I used a headnet, but it wasn’t necessary, except maybe after sunset.

The sunset was amazing. Every single time, without fail, I’m taken aback by the beauty of an alpine sunset. It’s no wonder why John Muir called the Sierra Nevada the “Range of Light”.

Sunset over the Crystal Range

Last light on the peak behind our camp

We went to bed around 10pm, and I set my alarm for 3am so I could attempt to photograph the Milky Way over the Crystal Range.

I slept without a rain fly, so when I opened my eyes at 3am I was blown away. The stars shined so so bright, and I could see the Milky Way (OUR OWN GALAXY!!!!) with my own naked eyes! It was truly unforgettable. I spent almost 2 hours staring and taking photos. Conditions were perfect – here wasn’t any wind at 3am, and the water was perfectly still. I’m super proud of this photo. 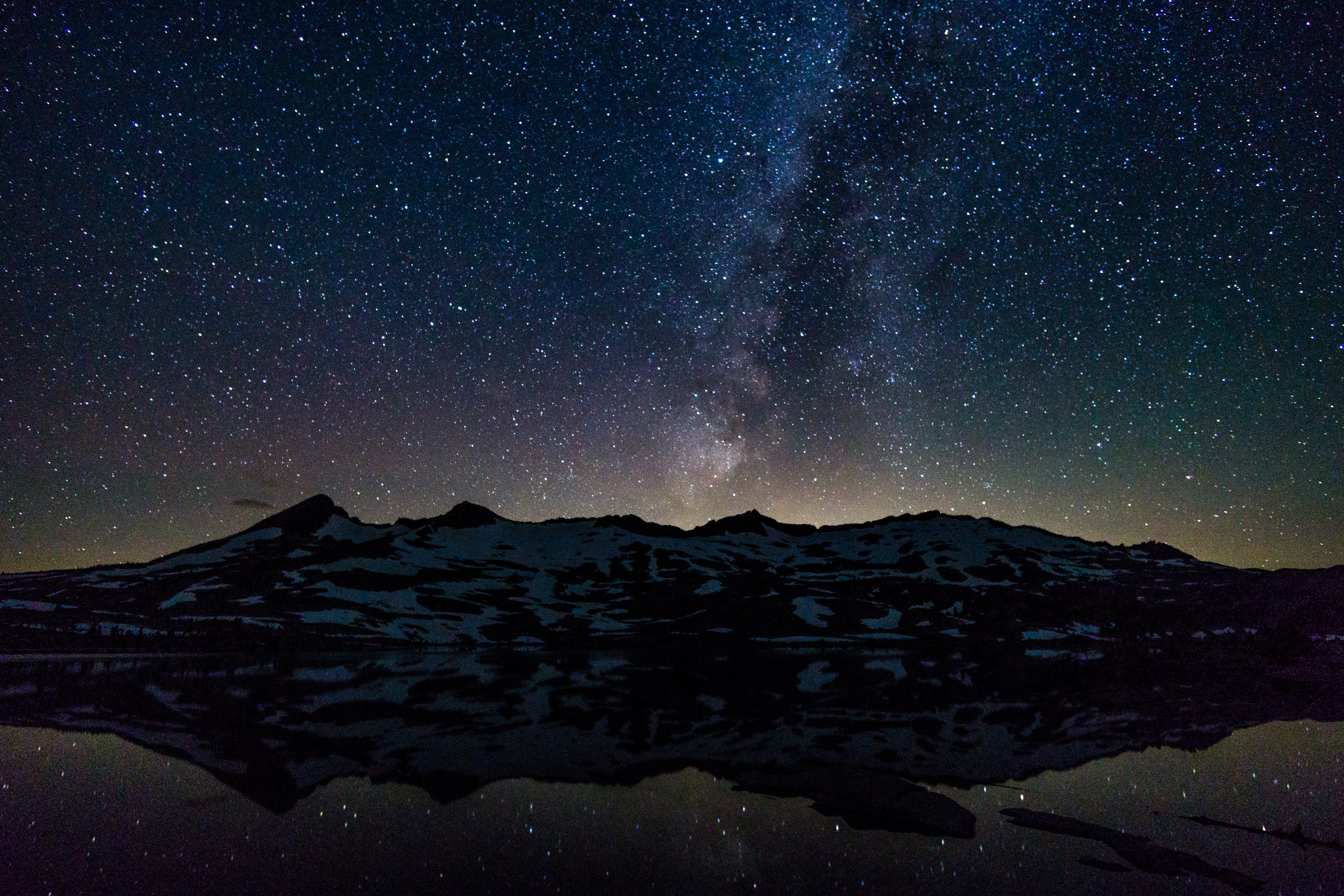 I went to sleep around 5am and set an alarm for 5:30am to watch the sunrise. Super worth! I actually left my tripod there overnight so I managed to capture the same scene at sunrise. 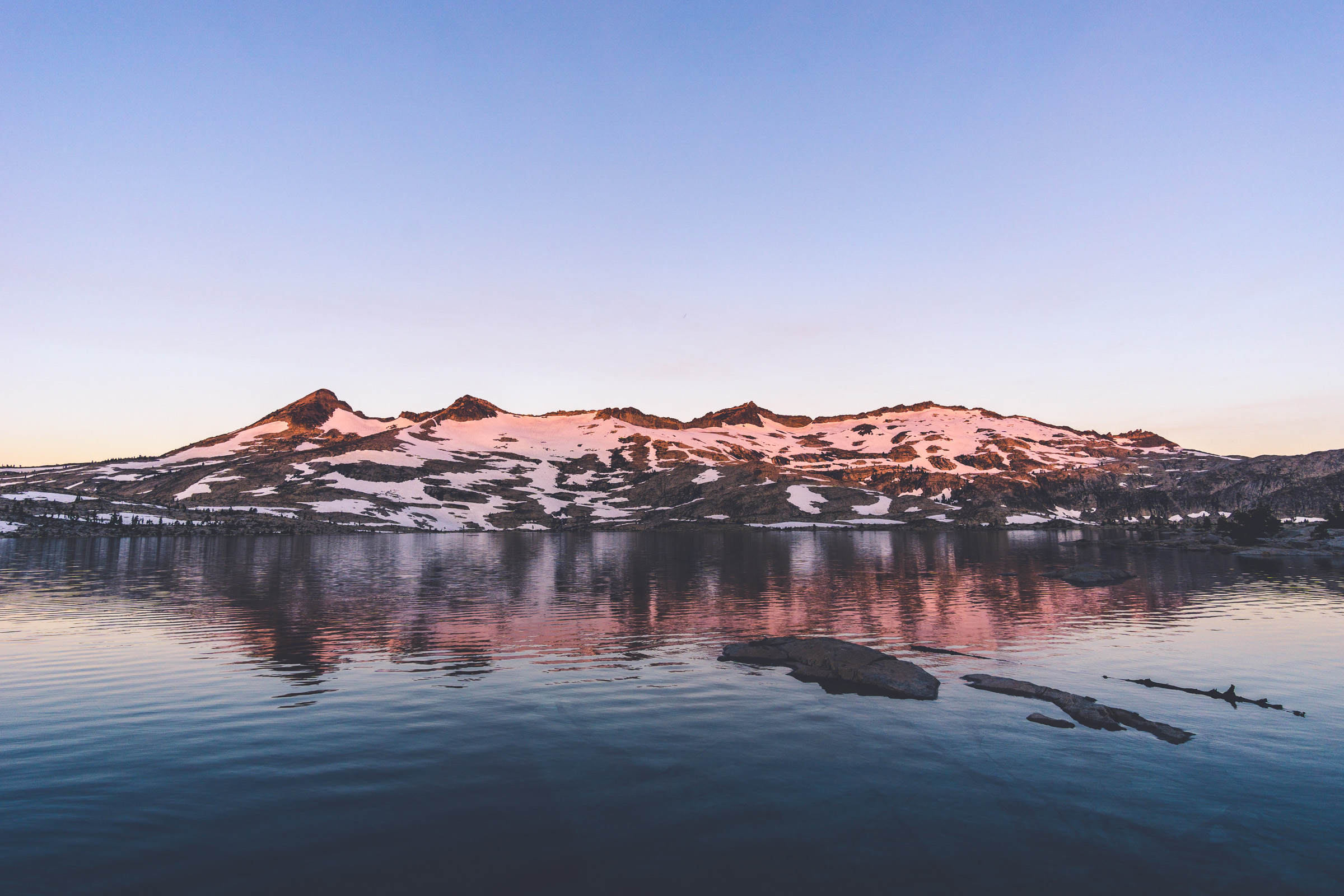 We had breakfast shortly afterwards, broke camp, and quickly hiked back to the trailhead before temperatures started climbing.

This was probably my last backpacking trip into the Sierras for the season, since I’m finishing up my internship and going back home soon. I wish I’d gone on more trips this summer! It’s such a shame the season started so late due to insane snowfall. Until next year!