An extraordinary trip that included summitting the highest point along the PCT in Washington, grand alpine vistas, two ridge walks, lush forests, two high camps, and two sub-alpine lakes. Three passing NOBO PCT thru-hikers mentioned that this was the most epic and beautiful section they've experienced. I can see why.

Here’s the link to the CalTopo map. 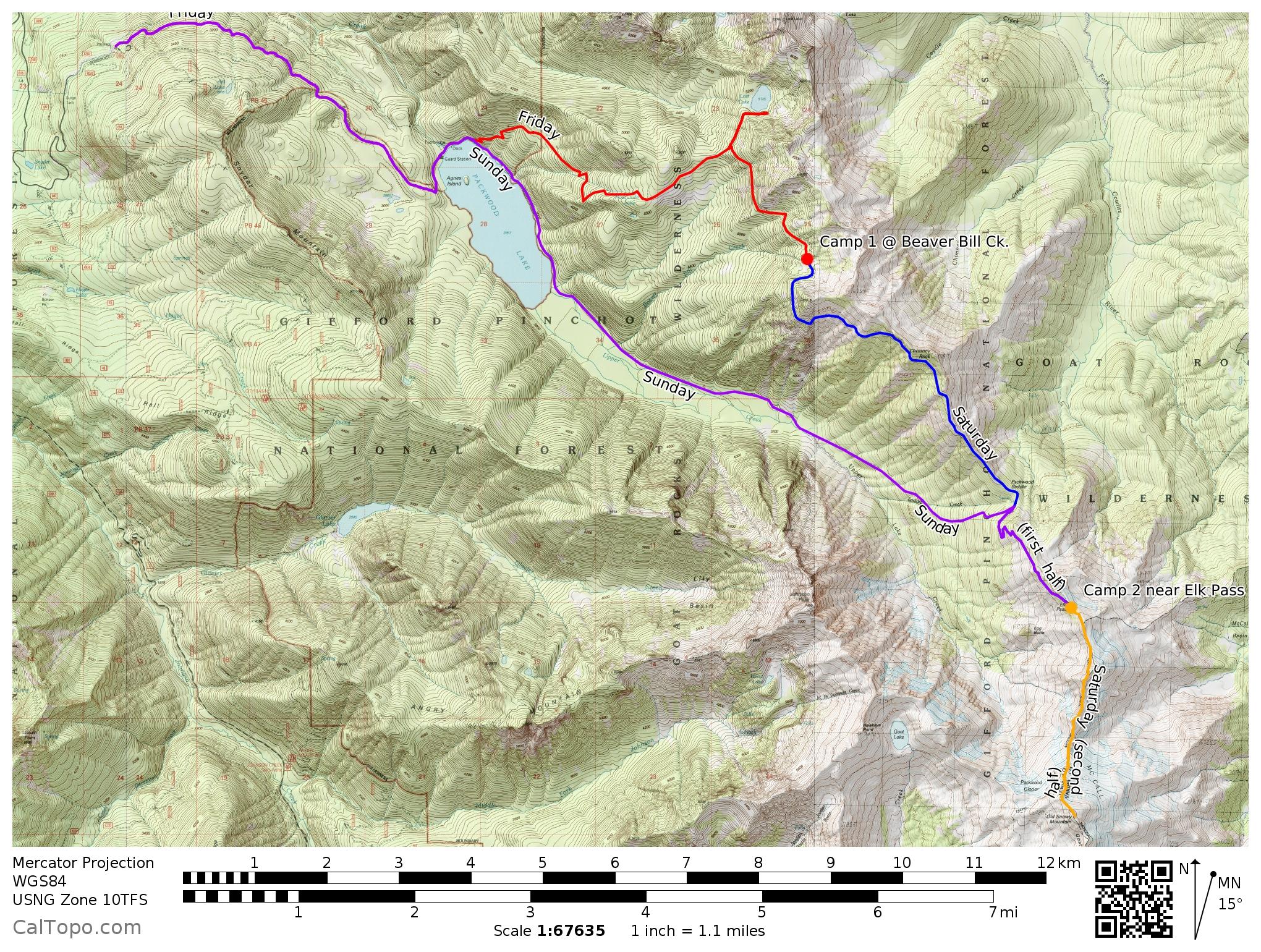 This was my last trip of the season. It was epic.

No sweeping views today but I knew we would be rewarded tomorrow for the work put in today.

We left the trailhead parking lot at around 1:30pm. Immediately we started a relatively flat and uneventful 4 mile stretch through a forest. We soon arrived at Packwood Lake, a pretty nice subalpine lake. However, there were lots of people were camped here, and we kept going.

After finally entering the designated wilderness area, we hiked 3.5 miles to Lost Lake, gaining quite a bit of elevation. The lake was nice – the white trees in the distance added some unique color to the landscape.

There was a family camping there, and it was nearing sunset, so we booked it to our destination – a campsite at Beaver Bill Creek. Thankfully no one was camping there tonight!

We were pleasantly surprised by the campsite… it was super close to the creek, and people had already made a bench and fire ring! 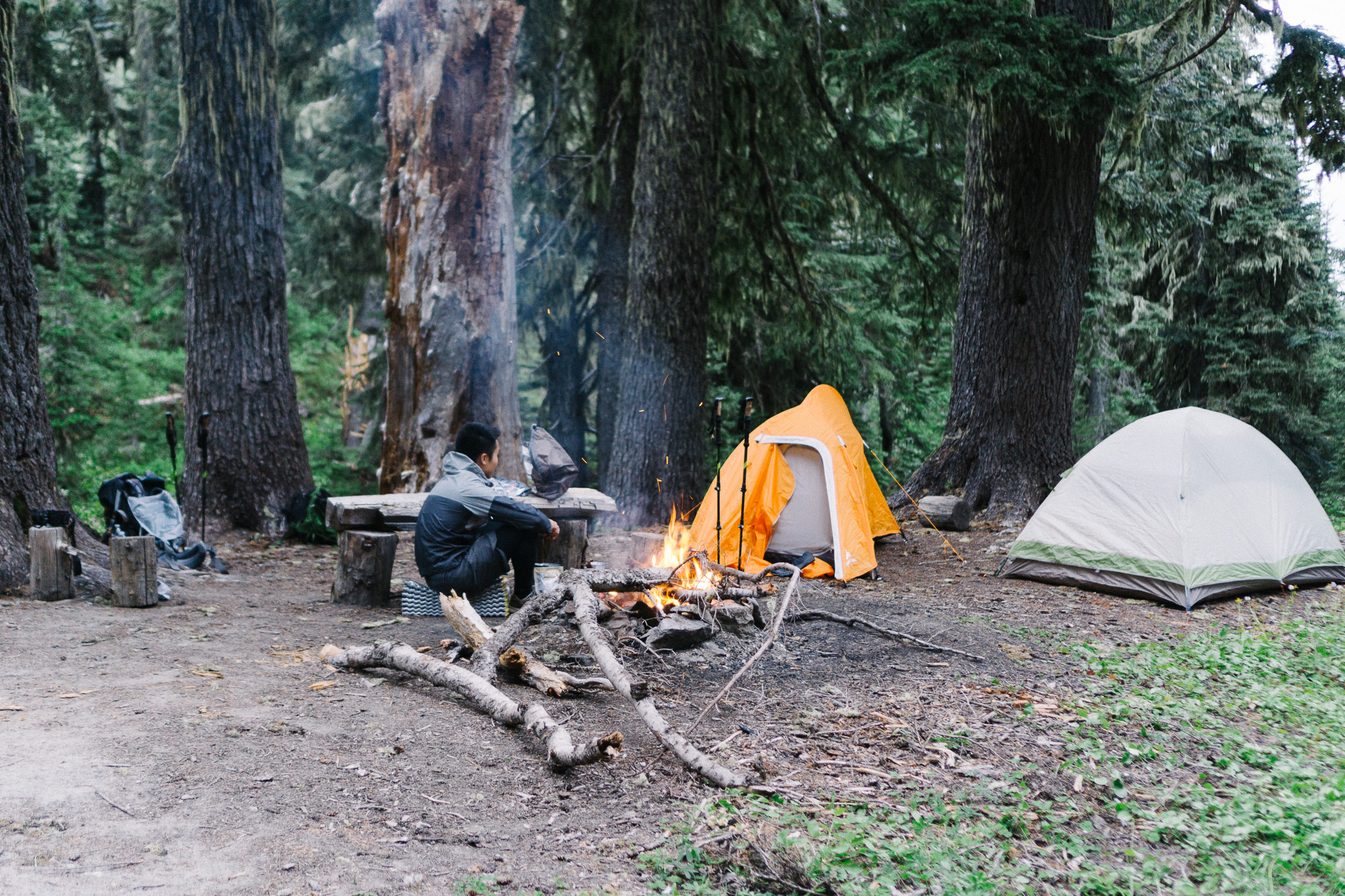 The fog quickly rolled in right before sunset, and we started a campfire, ate good food, and drifted off to sleep.

Fog blanketed the forest after we woke up. We ate a warm breakfast, started a campfire, broke camp, and hit trail soon enough. After a bit, we started getting previews of the big vistas to come. 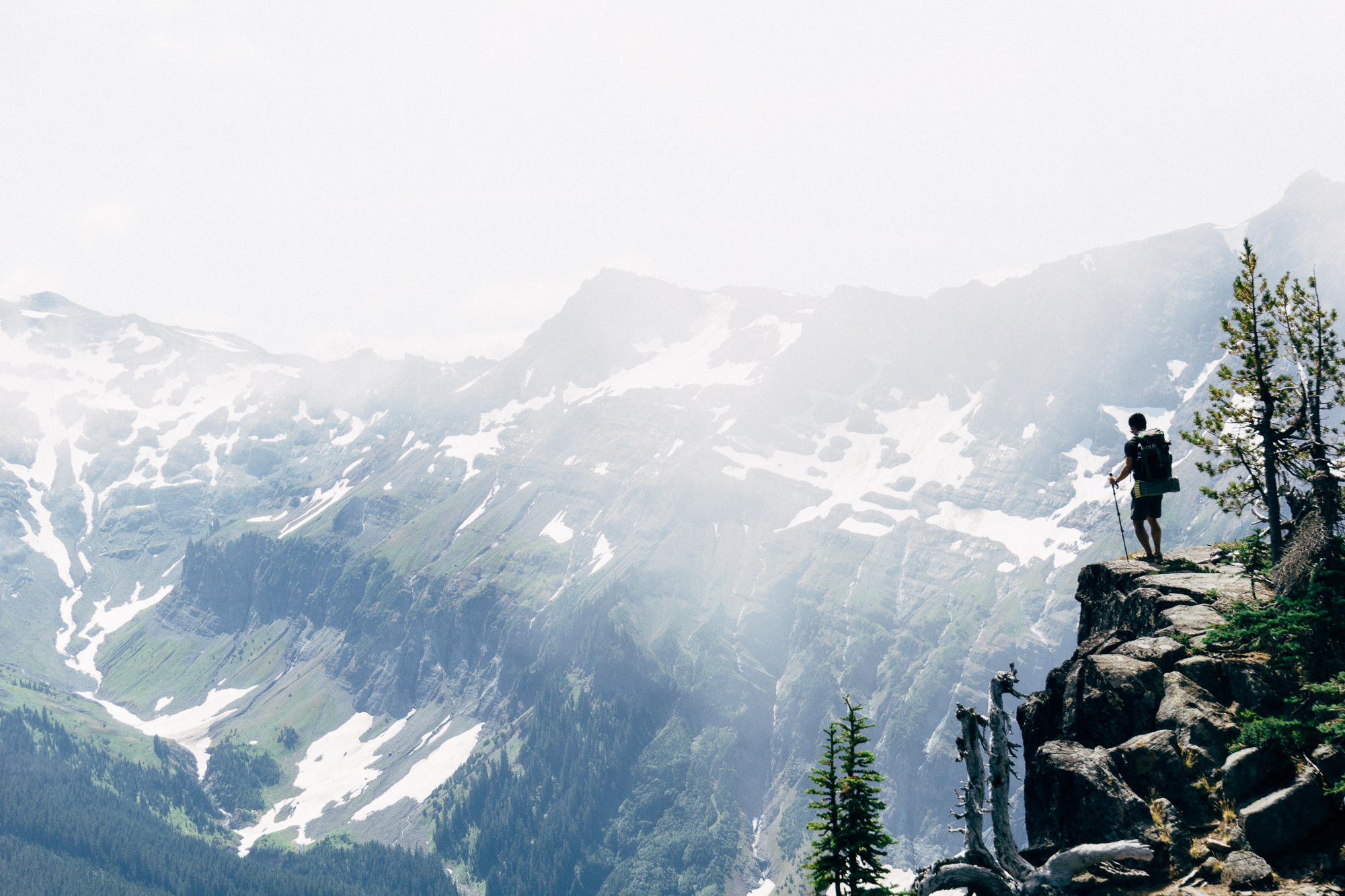 We were greeted by grand vistas

We reached a ridge after a long uphill stretch. Walking along the ridge was such a cool experience. With nothing blocking the view, we had huge views in every direction. The tall mountain far in the distance is Old Snowy, which I would be summitting later in the day. 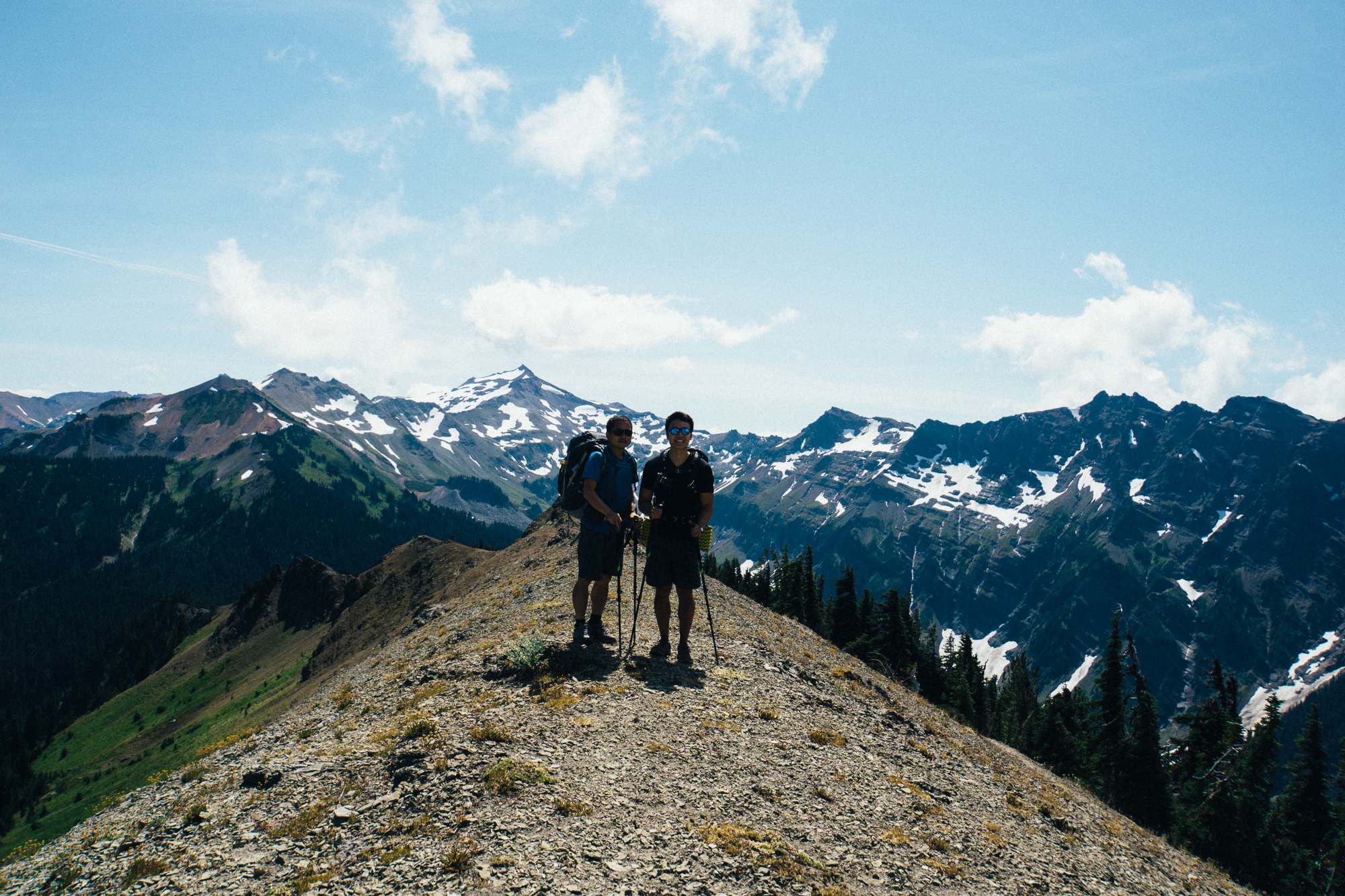 Ridge walk! with Old Snowy, our destination, in the distance

Sadly, after our long climb to the ridge, we started hiking downhill. It felt like wasted effort since we were going to climb back up anyways. It was straight downhill until we reached the bottom of the Packwood Saddle. At the bottom, we saw the fork in the trail that we would be taking tomorrow. There was a nice campsite too, but we’d planned on trekking to Elk Pass and setting up a high camp there in order to summit Old Snowy Mountain and still have time to make it back to camp before dark.

We kept hiking along the Coyote Trail until it merged with the PCT at the top of Elk Pass. We found a nice flat spot right off the trail where we set up camp. The camp was super exposed, as it was on top of a pass, and there wasn’t any water close to the site. The views were amazing though.

I left camp at 3:30pm and started booking it up towards the summit of Old Snowy. I wanted to make it down before sunset.

The hike to the summit was pretty cool. It mostly ran along a thin ridgeline, so hiking that quickly was super exhilarating. I saw a few mountain goats and ran into group descending. The views back into the valley were absurd.

The view back into the valley…

At some points I’m pretty sure I lost the trail and had to scramble on all fours to continue upwards. Kinda sketch. Also, the clouds started rolling in as I was approaching the summit, so visibility was pretty bad at some points. After pulling myself up to the summit, I spent more than an hour at the top, admiring the view, taking photos, and waiting for the clouds to clear. When they did, I was amazed. There were 360 views in every direction, I could see Mt. Rainier in the distance, and I could follow the ridgelines to where I came. A group of NOBO PCT thru-hikers summited shortly after I did, and I spent a bunch of time talking to them and admiring the views. 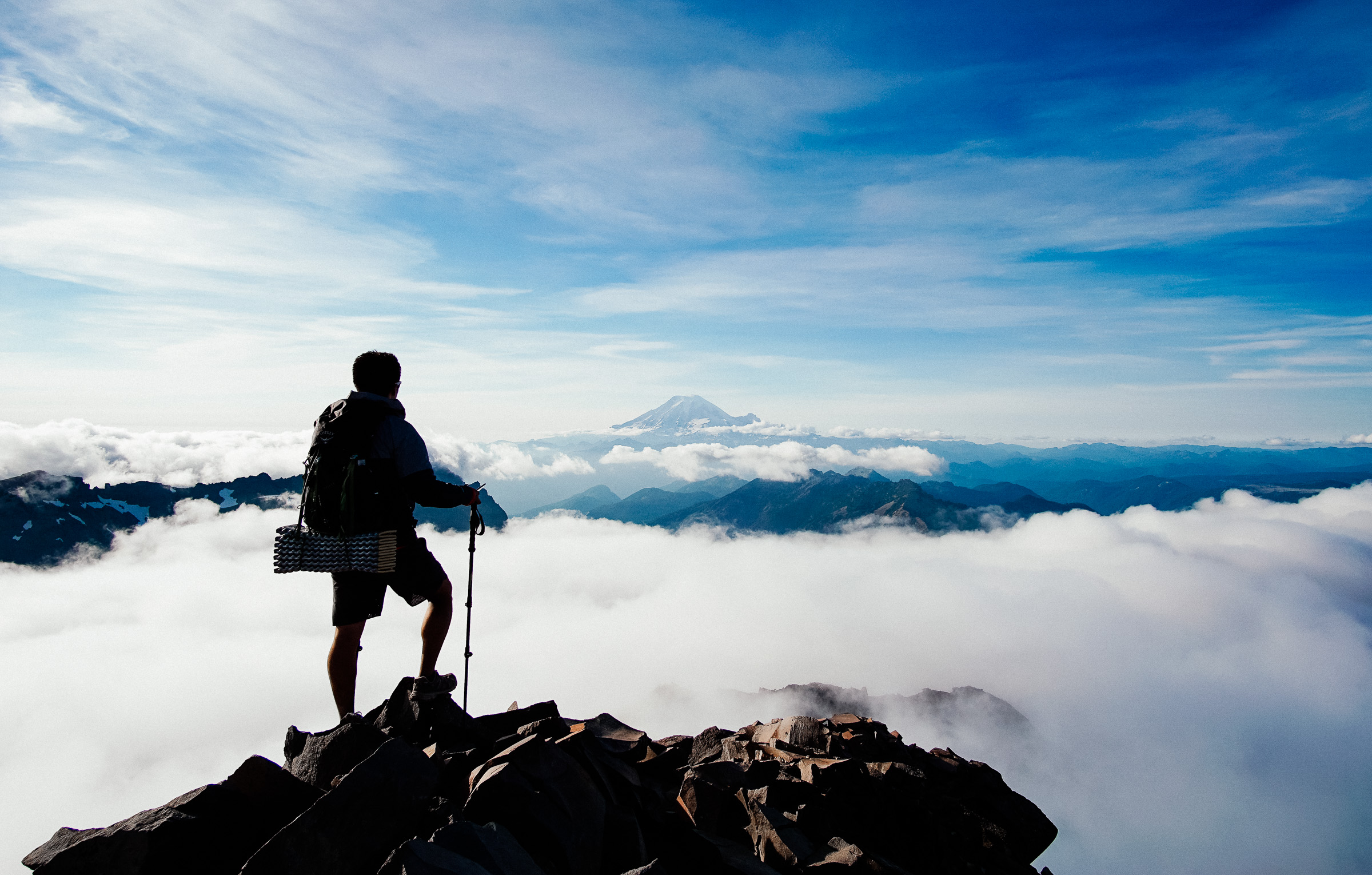 The view from the summit…

At some point, I forced myself to leave since there was less than hour of daylight left. It got super cold and windy so I put on all my layers and started running towards camp. The clouds had come in at that altitude so I was literally walking through clouds the entire time. The thru-hikers were close behind me. But as I was nearing camp, the clouds started thinning out and I got a glimpse of sunset peaking through the fog. It was one of the most beautiful things I’d ever witnessed. The others and I stopped and simply stared. They said it was the most beautiful section of the hike they’d experienced so far – I can see why. 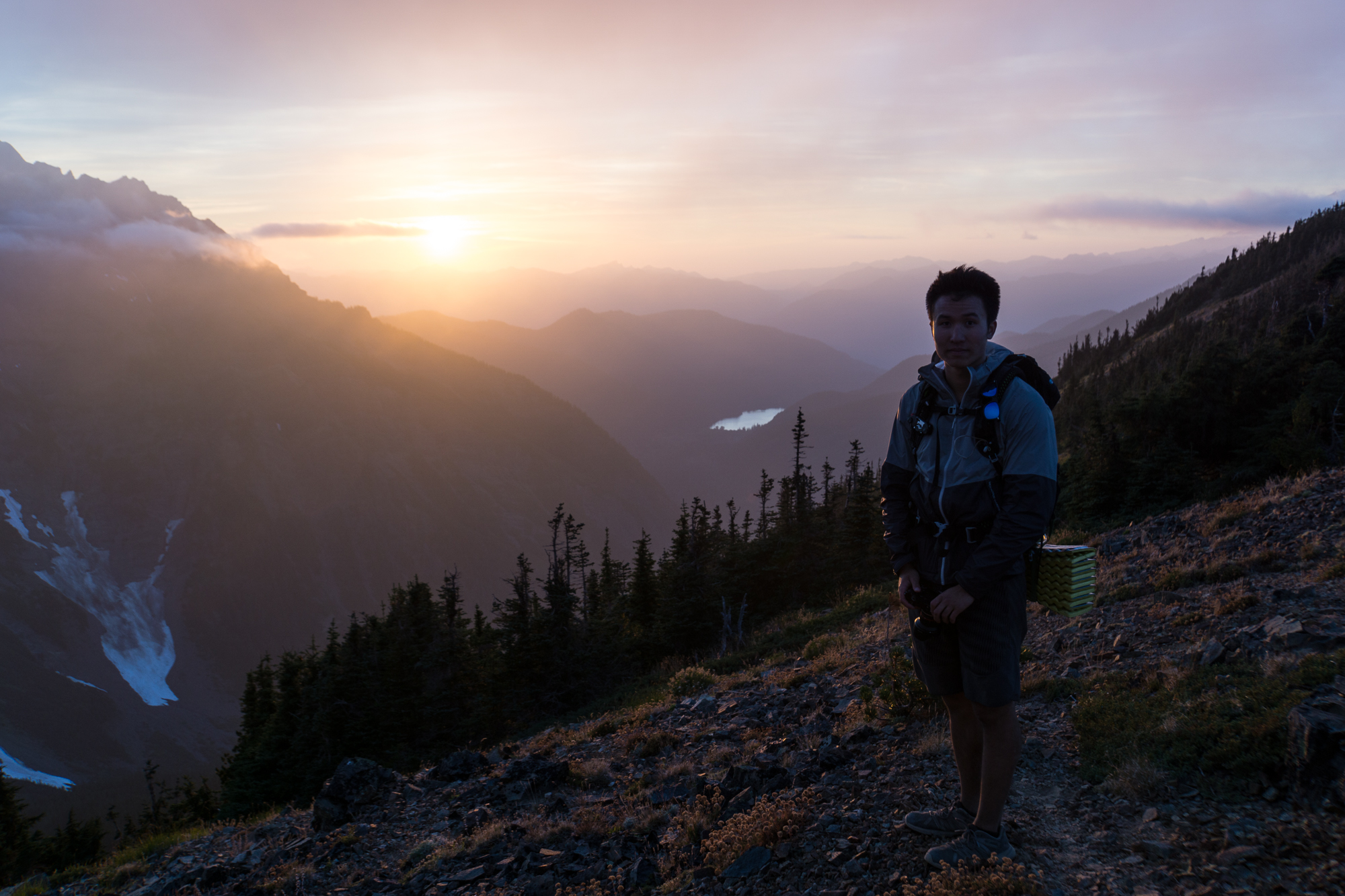 Freezing my ass off

The sky lit up in vivid shades of pink, magenta, and purple. It was one of the most beautiful sunsets I’d ever seen.

After getting back down to camp, we made dinner and started a fire to warm ourselves. Surprisingly, there weren’t any clouds that night, so I tried my hand at capturing the rising Milky Way. 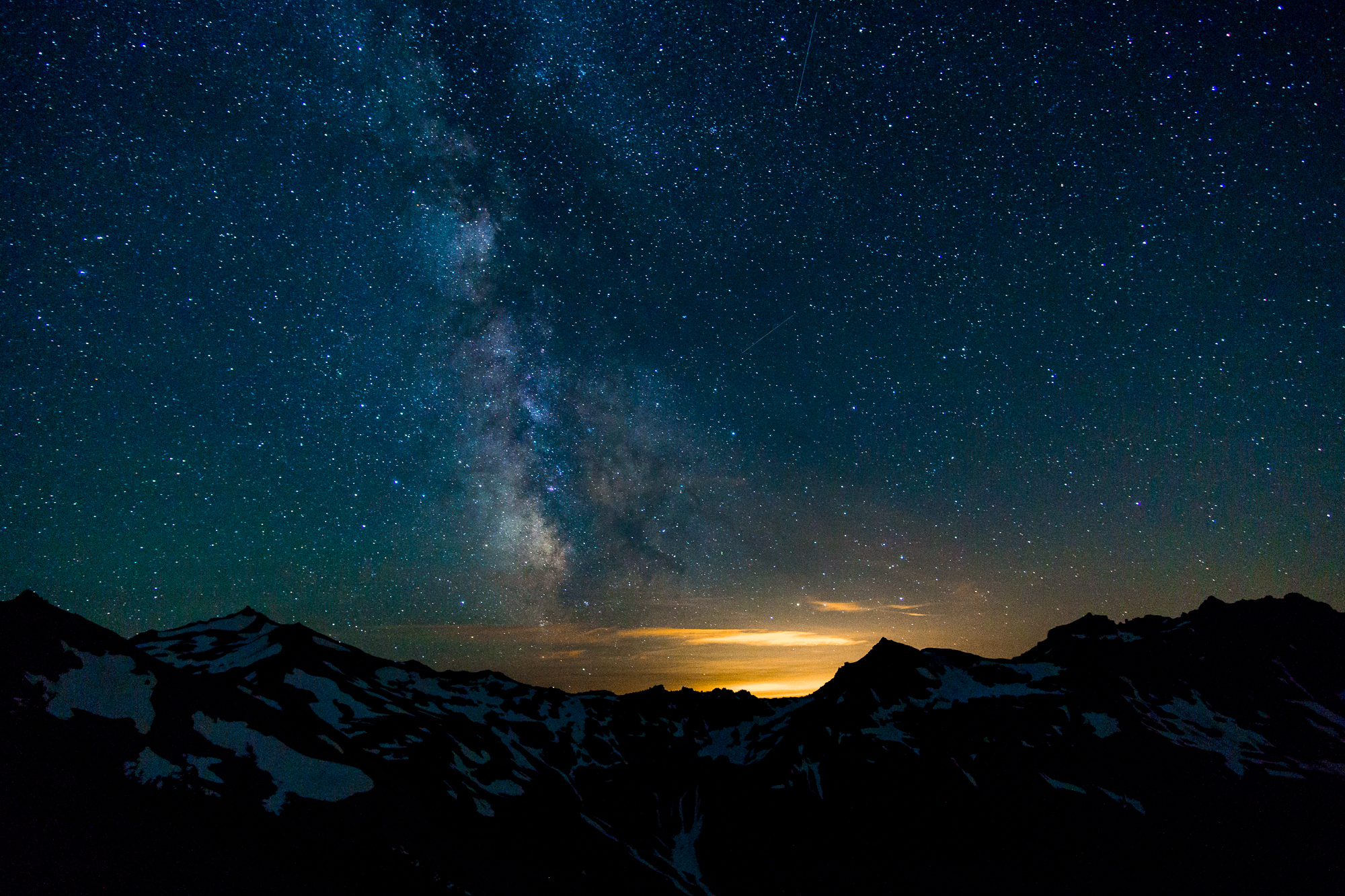 The Milky Way rises over the Goat Rocks.

We woke up to catch the sunrise. It was beautiful, but it was so so cold. I put on all my layers and still had to cocoon myself in the sleeping bag to feel comfortable.

The rest of the day was pretty uneventul. We hiked back down to Packwood Saddle and took the left fork to get onto the Upper Packwood Lake Trail. Then we had 12 miles of mostly downhill through dense forest. Lots of bees, but thankfully there weren’t too many mosquitos.

All in all, it was an amazing trip. I can’t wait for the next opportunity to go back outdoors!